This is the playdough recipe my kids use at preschool...It is the best I have ever used....This makes A LOT!!! You can halve if you need to. Also, read this through first before beginning.

(I use an electric handheld mixer while stirring). Mix liquids (and food coloring or kool-aide) together in a large pot and slowly add (w/mixer) dry ingredients.  Cook over a high heat until heatend through, then reduce to medium heat, stirring constantly (w/mixer as long a possible) until mixture forms a "dough" consistency...( I am usually using a wooden spoon by then and folding the mixture.  You'll notice that as you 'turn-it' while stirring that the hottest bottom part will begin to look like dough.  While still a tad "sticky" (but looks like dough throughout), remove from head and knead on wax paper.  (I have granite counters, so I clean them before beginning and then turn out dough straight onto the counter top to knead).  It is HOT so be careful (I use rubber gloves for kneading).  After cooling completely on the wax paper store in Ziplock bags or start playing.  If you close the bags while it is still warm, the playdough will sweat and then get sticky...if needs be, leave the bags open for a few hours.
Posted by Ginger at 12:01 PM No comments:

Things I want for my Birthday this year

Things I want for my Birthday this year.

1. Not to be on my period, cause I always feel like shit. (can a girl hope for a one day period?)
2. To sleep in past 7 a.m.
3. Not to have to cook or prepare one meal.
4. Chocolate (see number one...if I can't have that at least give me Chocolate)
5. To not read about how stupendous and wonderful and thoughtful other people's husband's and
children are on their birthday that is days from mine...
6. The dog to walk on lead without trying to drag me....for reals can he cut that shit out already.
7. For husband and children to at least remember that it is my birthday.
8. To be able to go for a run without whining or crying or being dragged. (see number 6)
9. No fighting.
10. A giant Margarita.
Posted by Ginger at 9:35 PM No comments:

My GOD What is That Thing?

This is from a guest post on my friend Kelly's page...please support her because she rocks.  http://debiehive.blogspot.com/

I am not sure how long I have known Kelly, the Queen, Debie.  We went to the same middle and high school. We hung out in some of the same circles, yet never quite with each other.  Our school and community was small enough that usually when you mention a name of someone who graduated the same year as you, you know of them.  Thanks to the Internets, Kelly and I discovered that even though we both moved 1800 miles away from our home town, we were only 30 miles from each other.   I started writing an occasional blog post on my own blog because of Kelly.  Kelly asked me to discuss what it was like to raise bi-racial children.  I am white, grew up in a very white town, and married my high school sweetheart, a full blooded Korean American.   Here is my story about raising two Korean/Anglo American Children in a mid-sized college town that is predominately white.

As any first time mom, I would proudly jaunt around town with my adorable baby girl, trolling for compliments.   I'd contemplate outfits to dress her in while nursing at 2:00 a.m.  The outfits that would best compliment Cookie's dark copper complexion.  Lavenders and purples mostly.  I couldn't wait to brag discuss her birth story.  Yes, I was the first person in the world to give birth drug free!

First time parents, well those that are honest, will tell you, the first year is the hardest.  With your first child, the first few months are wrought with nervous fear that you are doing it all wrong.  You are literally fumbling around in the dark trying not to feel like you are fucking it and your child up.  Not to mention the hormones.  For me, I was in a horrible haze of postpartum that I didn't realize I was in...until..well I was no longer in it.  So, when stranger after stranger approaches you to gush over your sweet baby, you lap it up. However, for me, the comments towards my child were more like a double edged sword.

Cookie was born with the darkest of brown hair, almost black.  And she had a lot of it.  She came out and the nurses just about swooned over her double dimpled chubby cheeks.  I was very excited over the dimples, I had always wanted them for myself.  Her skin was a beautiful copper color.  She was like a Korean version of me.  Her eyes were almond shaped but had the "double eyelid" that is so important to have in the Korean culture.  In Korea, women march in droves to get plastic surgery for double eyelids.  For those that don't know, It means, having the extra fold that white people have.

The first indication that my interaction with strangers with my child would be different was the constant stroking.  A stranger would come up to me, and begin stroking my daughter's arm.  "What beautiful skin color she has. You are so fair..." They would leave the last word hanging, like I needed to fill in a blank that was missing.  When pregnant, I kinda got creeped out at stranger's wanting to touch me. This was my child, creepy went to a whole new level.  It is one thing to want to grab a baby's hand and have those little fingers wrap around yours, or touch the sweet toes.  Who can resist baby toes?  But the stroking was weird.  In all my life I've never been compelled to stroke a strange child. Okay, maybe squeeze some baby thigh.  But continually stroke a baby's arm...weird.

Besides the stroking, there were the rude comments and questions.   I am not exaggerating them, I am not making this up.  The following were actual things said to me, on almost a daily basis, by more than one person.

- Is she yours?
- Where'd you get her?
-My cousin(brother, sister...extended family member or friend) adopted from China.
-What is she?
-Is she American?
-She looks.......not all white?
-She looks kinda like my friend's kids who are adopted.
- My (insert relationship here) is married to an (insert any ethnicity).
- Are you the nanny?
- Your baby is so exotic looking.
- What's her nationality?

Apparently my copper skinned, almond shaped eyed, dark haired baby looked nothing like me.  Here I carried her for 9 months, gave birth (drug free...at the time this was important), was nursing her exclusively (she refused a bottle of even pumped milk), and she doesn't look like my child!  I was indignant.  I was angry, and did I mention a little post pardem and depressed.  The only joy I was getting was showing off my child and these people were taking it away!  I had an identity crisis for her.  I started dying my hair dark dark brown, almost black in order to look more like her.  I began wearing make-up, lining my eyes to look more Asian.  I wanted my baby to never have to question who she was or where she belonged.   Hubby just shrugged and said, "yea, that's what it is like to be not white. Get used to it."

I began to get pissy.  Mostly because I wanted people to recognize that I was her mother.   Depending on how people asked, I began to answer in all kinds of equally rude ways.


By the time Jelly came around two years later, I learned to grow thicker skin.  I also learned that no matter what, people would be interested, that people are rude and feel their curiosity should be answered.  More importantly people didn't know the difference between race, ethnicity, and nationality.  My job, as my children's mother, is to give them a foundation in their family histories.  To teach them Korean, to discuss why their Harmonee and Harabogee look different and speak different than Nana and Papa.  Most importantly, my job is to give them pride and love of themselves not based on race or their ethnicity, but on their actions.

The hardest part of raising a bi-racial child, as a white parent, is confronting racism for the first time.  Real racism.  The kind where old white people look at you and your child like you have leprocy. The kind where skin heads glare at you in a menacing way.  To come to terms with one's own white privilege. ( A great 'guide' to read is this http://thoughtcatalog.com/2013/a-definitive-guide-to-white-privilege/) To finally know that you don't know racism.   It is one thing to experience prejudice and racism against oneself, it is another to experience it for your child.  To have caused them harm from just being.  To realize that no matter what, someone may call your child ugly or worthless because of their ethnicity or the way they look. My job is to teach my children tools on how to deal with that racism.  At first, in my rage,  I decided that I would not sit back and take people's ignorance, I would shove it in their face.  Make them see how they were insensitive or just plain ignorant.  Today, I like to sit back and wait for someone to stumble through asking me.  How I perceive that person, what kind of human being they are is from that interaction.  I try and take the high road.  Sometimes I just give them the answer they are seeking.  Sometimes I make them work for it.  Mostly I try to be a
positive role model for my children.  Do not let what others say define you.

But times they are a changing.  When I had Jelly, in 2009, I did not get quite so many of the rude questions I received in 2007 with Cookie.  I am not sure if people stopped asking because 1. Jelly was fairer skinned, with light brown whispy hair. 2. They would see me with two children that looked alike, but different in coloring, so they assumed they were both of my loins. 3. Cookie started to look more like me as she got bigger.  4. Our community has changed.  Since the time we moved here, you could go months without seeing someone of color.  Where if we came across another Asian, hubby and other Asian would give each other a nod. Or if it was a young adult or teenager, they'd get super excited and say, "I"M KOREAN TOO!" Once at a restaurant, a young college student's friends pointed to Hubby and said to their Asian friend, "Look there is another Asian in town!"

Now we see so many mixed couples, mixed children, that I think people are just more accepting.  It is the norm.  The bi-racial child is no longer a circus attraction.  This means that I can take my children to the park on the day the families who did adopt from China have a support group meet-up and not be asked to join them.  (true story this happened) Does this mean the road for my children will be easy?  I am sure they will experience all kinds of ignorant, mean, cruel, asinine behavior from children to grown adults.  My job is to help arm them in the best way possible.  To be kind, to be intelligent, and to be world savvy.

Posted by Ginger at 2:17 PM No comments: 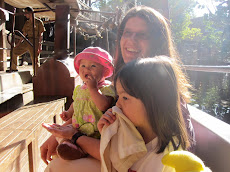